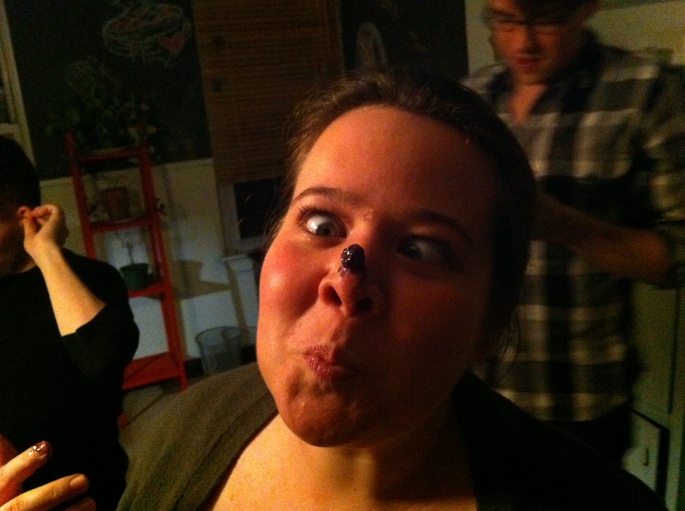 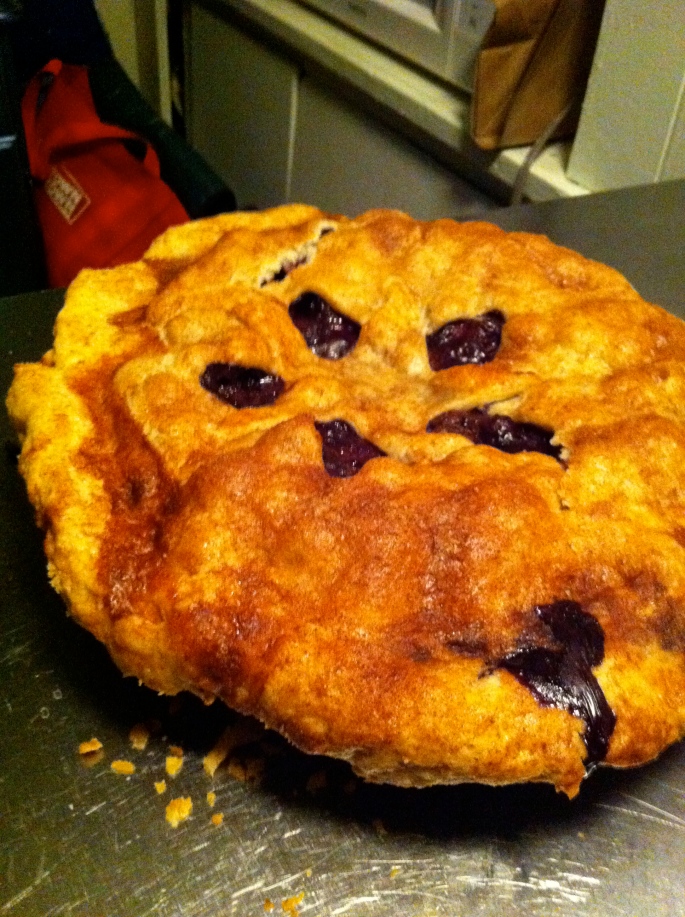 When you’ve got delusions of grandeur, you sort of have to have people around to help you sustain them.

Someone who will go, no, you’re not wrong – you could TOTALLY play 23.  Other comics. 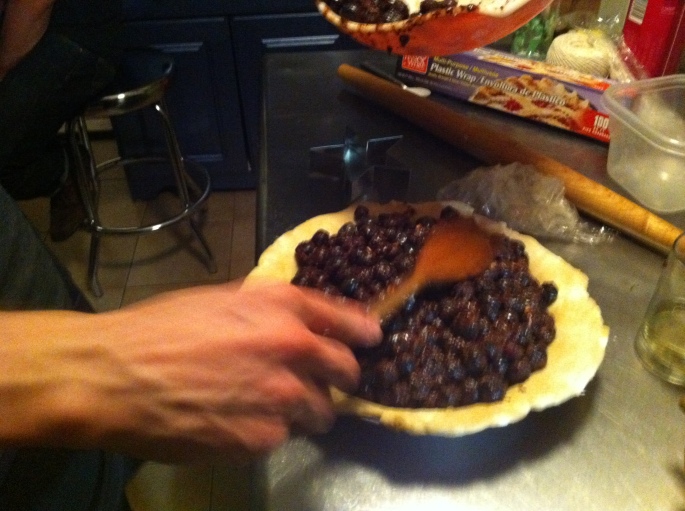 Some very funny people came over for dinner and pie: 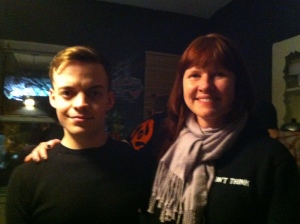 “Hi, I’m Jason Blaine.  I am an adorable elf-person.  I am  an actor and a t-shirt designer.”  I did a show  with Michael once that led to our eventual friendship.  I could never be a boxer because my fists are so tiny.

“Hi, I’m Pam Murphy.  I had  a horrible, debilitating cancer.  But  that doesn’t stop me from chain smoking all the time and making  homophobic wise cracks.  I wrote a show about what a jerk cancer is.  Just kidding.  It’s more about what jerks PEOPLE are when they find out you have Cancer!“ 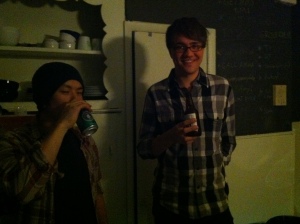 “I’m Enrico Wey.  I’m in this tiny little Broadway play called War Horse.  Heard of it?  Well I also travel around the world.  I love playing with puppets.  Please don’t complement me.  I will short-circuit.”

“Hi.  I’m Matt Pavlovich.  I’m on a UCB sketch team with Michael.   I love to rollerblade and hang out with my comedy and yoga friends.  Did you come to my murder mystery party?  There was a naked albino man peeing on people.  I don’t like it when it rains.” 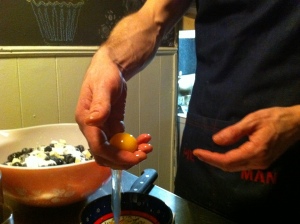 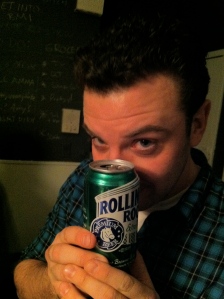 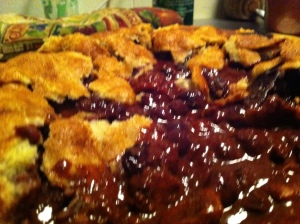 This is why you let a blueberry chocolate pie cool before slicing it.  And also, maybe don’t make it.  It was not entirely successful.  Reminds me of that time I got the squirts on spring break in Mexico. 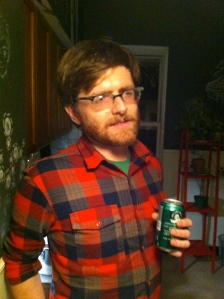 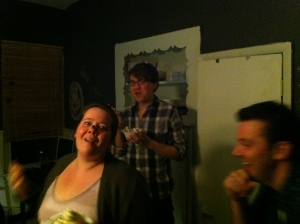 “Hi.  I’m Marcy Jarreau.  What can I say?  I’m pretty damn funny.  I wrote a musical about a lesbian camp that everyone loved.  I’m also on the UCB team Badman.  That adds up to awesome.  By the way, that character on Maude that I’ve been doing?  Totally Cajun.  I swear.  SHUT.  UP.  GARRETT.” 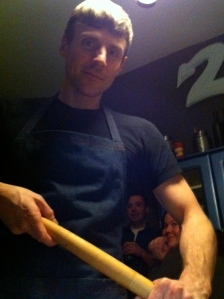 We ate dinner and then played Celebrity.  Then we ate that Blueberry Chocolate pie before it was properly cooled.  The crust is perfect. 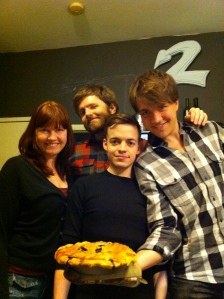 These Jerks won.  They were an amazing team.  Except for Garrett who was a poor sport and shat his pants on accident.

Then on purpose.  Then on accident AGAIN. 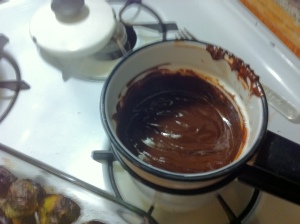 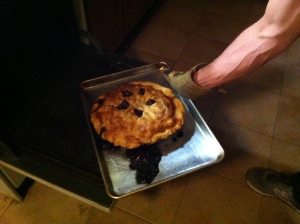 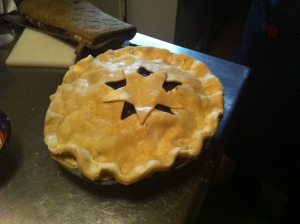 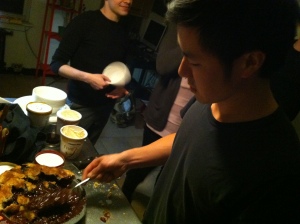 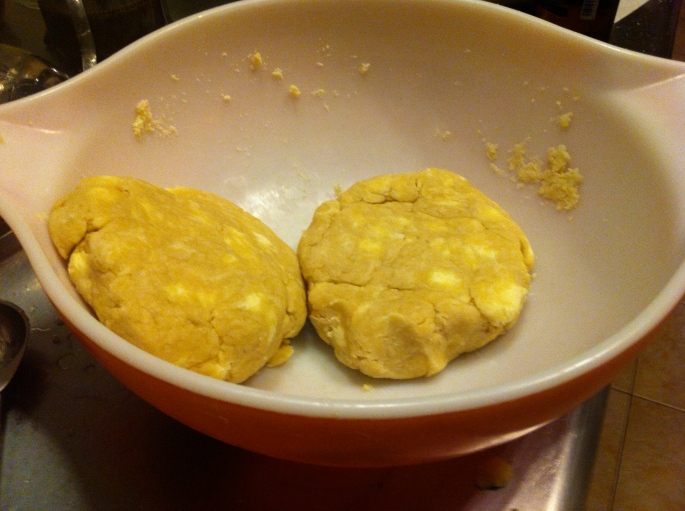