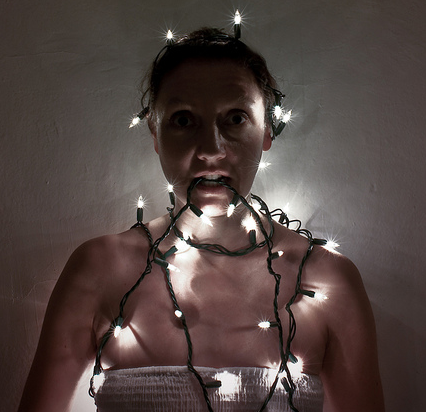 Nobody.  Nobody is better than Ari Scott.

What’s that you’re nattering about?  Okay.  I guess Jesus.  Jesus is better, if you’re speaking semantics.

I mean.  He did start one of the world’s big three problem religions, so maybe Ari IS better.   Don’t get mad, I’m not saying your beliefs are dumb, I’m merely pointing out that a lot of blood has been shed over the Christian/Jew/Muslim thing over the last few thousand years.  Right.  And still.  Now.  We’re still doing the bloodshed thing.

What?  All this secular talk is unpopular and people want to hear about Ari Scott, and her connection to pie? 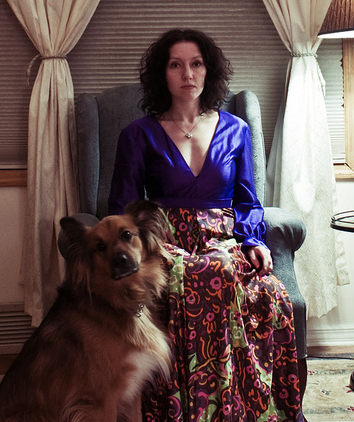 Clearly Ari has a sense of humor:

See that photo?  It’s funny.  Mostly out of irony, which, fuck you guys, is not dead.  I agree – people NEARLY beat it to death in the aughts.

Ari clearly proves that irony is not dead and is still very funny.

SHE’S not a strident upper-middle class housewife with a dog, as this picture clearly suggests.

Point is, she doesn’t HAVE to pick.  She’s great at all of that stuff.

Check her out if you don’t believe me:

I’ll wait here a minute and preheat my oven. 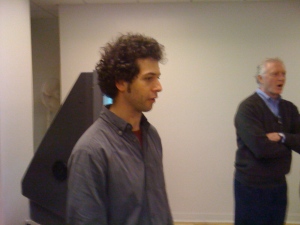 NO SMARTASS, not the guitarist from RED Hot Chilli Peppers.  He’s a comic at UCB theater and in New York and on the Internet.   He organized a nice surprise party for Ari.  He had some of her friends bring laptops to the UCB training center and set them up like a gallery, but on iMacs.  Hot, right?  It’s a start.   She’ll be in art galleries soon, kiddo, not to worry.

By the way, John’s nick name is Fresh Titties.

Why?  Because that’s the freshest supply of tatas.  Clearly.  Stop asking questions.  WHY DO I KEEP YOU AROUND?  Put your pants on.  I remember now. 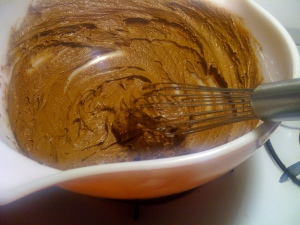 I made another Mexican Silk for this party.  I wanted to get the recipe right, and I think I did.   Didn’t I?  Oh right.  You didn’t get any of it.  BECAUSE YOU LEFT THE SINK ON.

Oh come on, you know you di…  never mind.

I got it right this time, with more cayenne and cinnamon to really pack that punch in the crust.

A lot of fun, funny people came to support ari and her surprise party.  I was busy obsessing about the pie, but I heard them saying nice things about her. 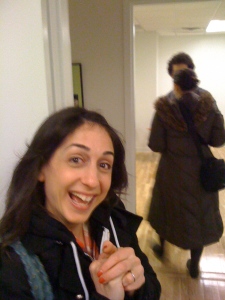 “I’m Leslie and I’m super cool.  I wrote a show called Love Can Suck a Dick with Megan Nurenger.  It’s super funny and it’s playing on Friday at 7:30 at the Upright Citizen’s Brigade Theater with Pam Murphy’s award winning The C Word.  Wow this pie Michael made is world class.” 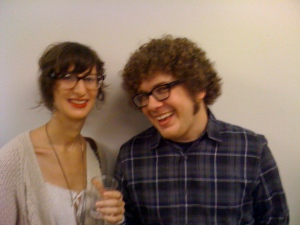 “I’m Geoff Garlock.  Yes, you really spell it that way, why? I’m in a buncha bands and I write comedy for Maude night and other stuff around UCB and New York.   AND the internet!  Do you like my new haircut?  I change my look often, and this is a capricious throwaway.  Tomorrow, preppy, maybe.  Michael Martin is funny.” 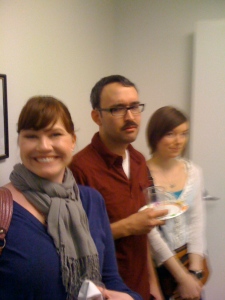 “I’m Kirk Damato.  This is my girlfriend Sarah.  No.  Not her.  Not the smiling one, that’s Pam.  Why would she be smiling if she was my girlfriend?  The smirking one.  Yes.  Yes.  I know.  I AM LUCKY. Why am I looking sullen?  Because I have a desperate need to appear interesting, just like every other comic in the world.  Speaking of comedy, I am on an improv team called Decoster at UCB.  Or I was.  It’s complicated.  Now I’m in Japan.  Look my acting adventures up on www.talkingbreakfast.tumblr.com.  The point is, I’m here for Ari’s party and to tell Michael how hilariously wonderful EVERY SINGLE THING HE’S EVER DONE IN HIS LIFE IS.”

Stop it Kirk. GUYS.  This is about Ari.

Speaking of God, did I say something secular?  I did.  Yes.  Good.  I’m kind of secular.

Ari is a wonderful lady.  Very kind.  Very talented in many areas.  John is a good fiance.  They are lucky.  Here are photos of the event. 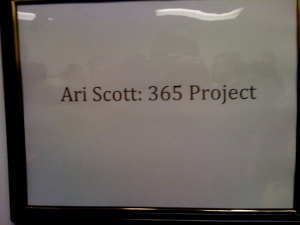 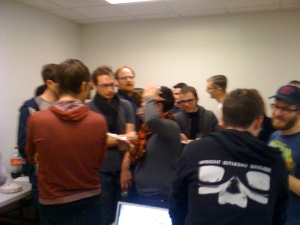 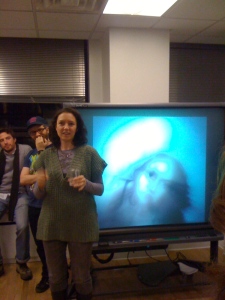 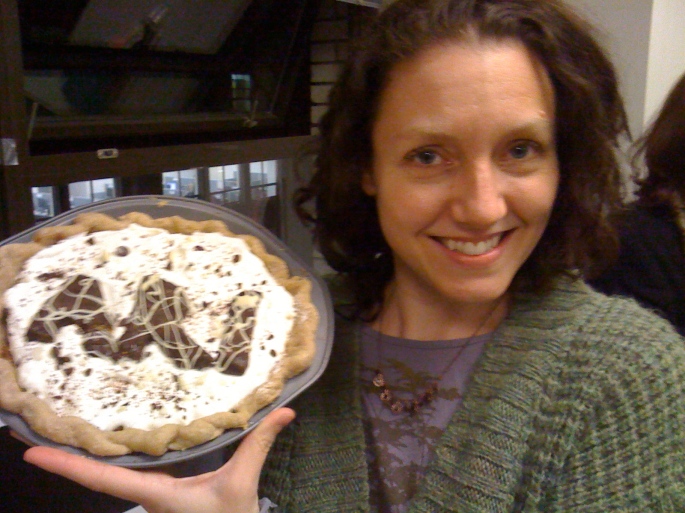 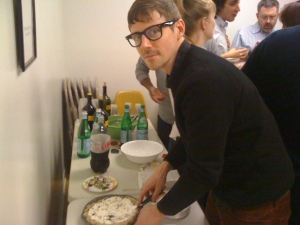 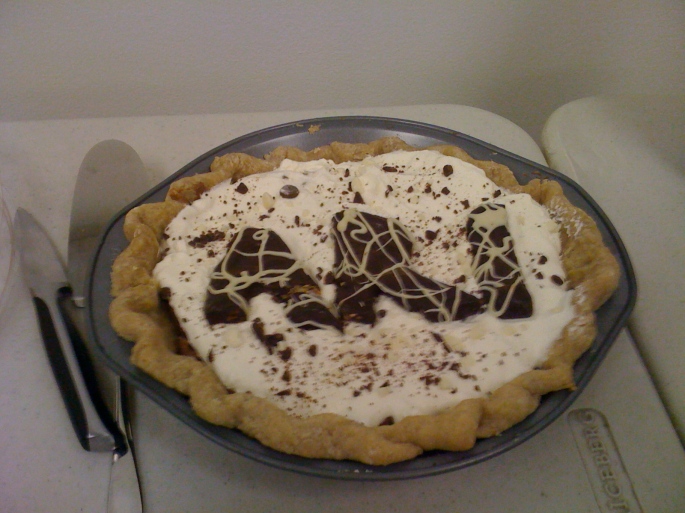 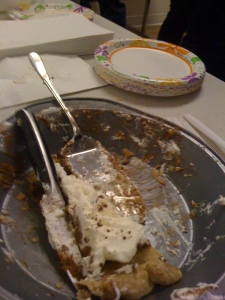 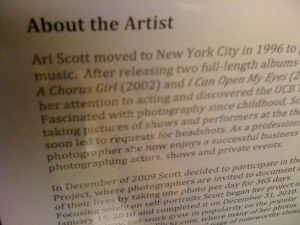 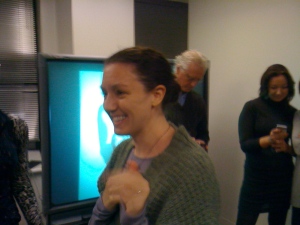 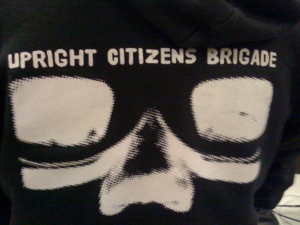 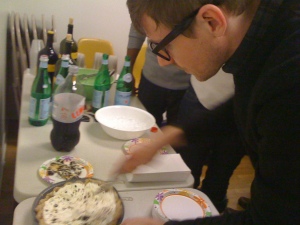 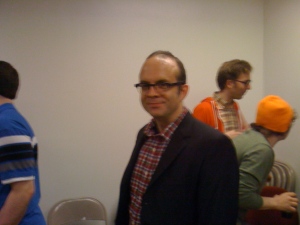 This man is not funny.