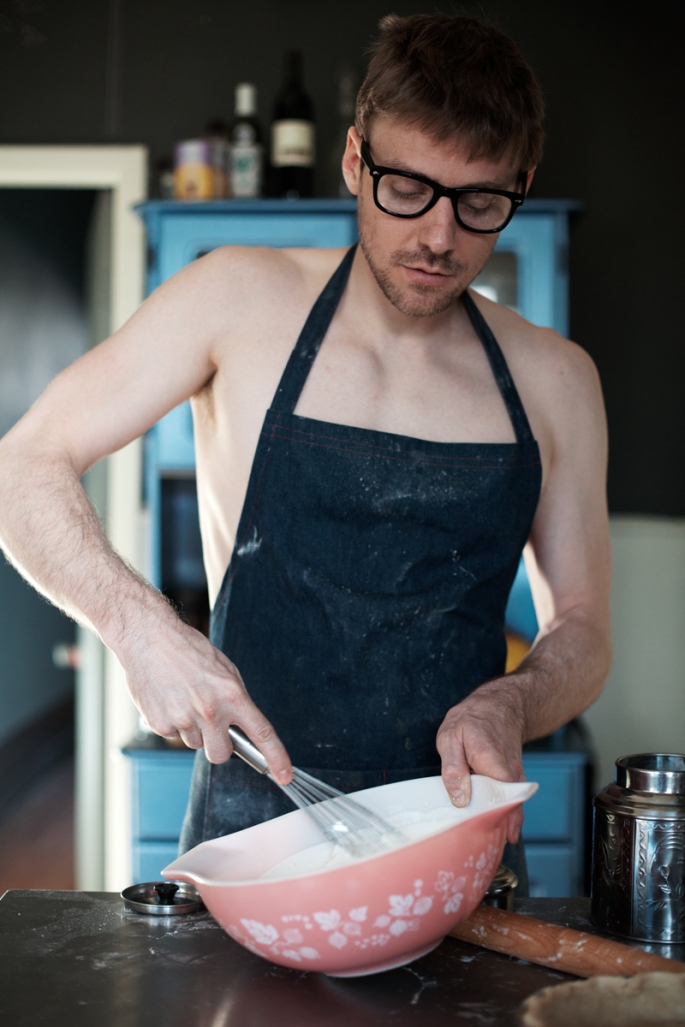 Him:  I feel like I’ve been here before.  How long have you lived here?  Did this apartment come with chalkboards up? This apartment is big for New York standards.  I can’t believe I’m hanging out at PIEFOLK.

Me:  It’s just my dirty kitchen.  I’ve been here about 8 or 9 years.  The chalkboard is just paint you can get at Home Depot.

Him:  You painted it yourself??

Me:  Ha.  That wasn’t an option.  I was having some lean times when I painted these walls.

Him:  So what are we making?  What is this?  Sour cream?  Why did you buy sour cream?  Are these blueberries?  This is the first time I’ve ever made anything.  I never made food before.

Me:  You’ve never made food before?

Me:  Wow.  You’re from a wealthy family.

Me: If you say so.  Sounds wealthy to me.

Him:  Well I left.  I didn’t want to do it.  I couldn’t.  Can I check my Facebook?  What is that?  What are you whisking?  Is that butter?  What’s this for?  What are you doing with that yellow liquid?  Is that egg?  Who was that guy from last week with all the muscles?  How tall are you?

Him:  Ugh.  NO WAY.  I tried dating a go go dancer for a while.  No thank you.  They’re not suitable for dating.  That’s not what they’re for.

Me:  Can you tell me a little bit why it didn’t work?

Him:  I just had a hard time with it.  I would get resentful.  He was always going out to get naked with other people.

Him: What’s so funny?

Me:  He was doing his job.  The job he was doing when you presumably met him.

Me:  It struck me as ironic.  Your tone was all ‘don’t date go go boys.’  You said it pretty strongly, as if you were going to follow up with some sort of moral failing they have.  But, you’ve only really listed your own flaw.

Me:  Jealousy…  Inability to accept him for who he is/what he does for a living.  He was just doing his job.

Me:  You’re pretty, and your skin is amazing.

Him:  I bet you say that to all the boys.

Him: That makes me feel so very special.

Me:  ‘All the boys.’  We have to finish these muffins.

Him:  Hey, do you have an iPhone charger?  Oh my God what type of music is this?  Do you like pop music?  Can I use your bathroom?  Is there a mirror?  What do I look like?

Me:  Yes to all, except pop music.  I like it okay, but this is some dark alt country station that I made on Pandora.

Him:  I can’t stand to listen to country music. Why do my eyes look so chinky?  I look Chinese!  Other Filipino guys have such round eyes.  I get mistaken for Chinese all the time. 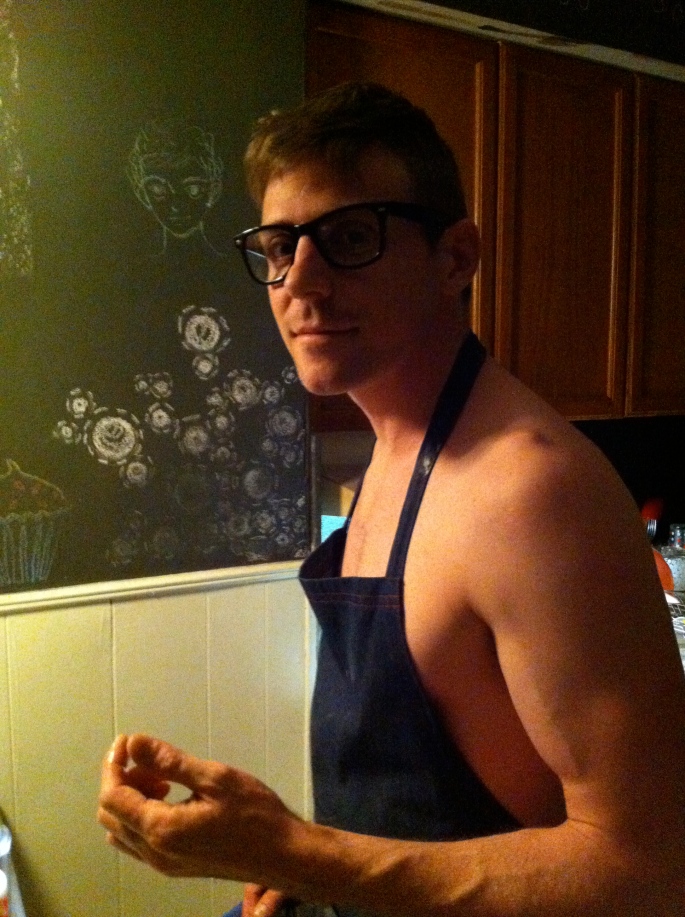 Me:  Your eyes are beautiful.  If they were rounder people would think you were Mexican.

Him:  That’s true.  People take me for Mexican all the time.  Can I have another hug?

(we hug for a while)

Me: Does your family in the Philippines know you’re gay?

Him:  Yes.  They had a ‘Coming Out’ party for me when I told them  I think that’s strange.  Why would you have to announce it??

Him: Yeah.  Why would you feel the need to announce it.  Straight people don’t have to announce their sexuality.

Me:  But Straight people do announce their own sexuality, all the time.

Me:  Yes.  They do.  A debutante’s Coming Out party is just a formal announcement that she’ll be taking dates from men now.  Straight people announce their sexuality all the time.  Going to Hooters with pals, getting your first date with a girl, asking someone to marry you in a public place, bridal showers – they’re all ways of announcing you’re straight.  A christening!  What is a christening if not proof that heterosexuality happened?

Him:  But why is it important for us to announce it?

Me:  You’re asking me this?  Me?  I’m the guy who bakes naked and gay all over the internet.  It’s important because we’re asked by an oppressive straight society to cover up, or subvert ourselves for the sake of not making straights uncomfortable.  It happens all the time in various subtle and blatant ways. 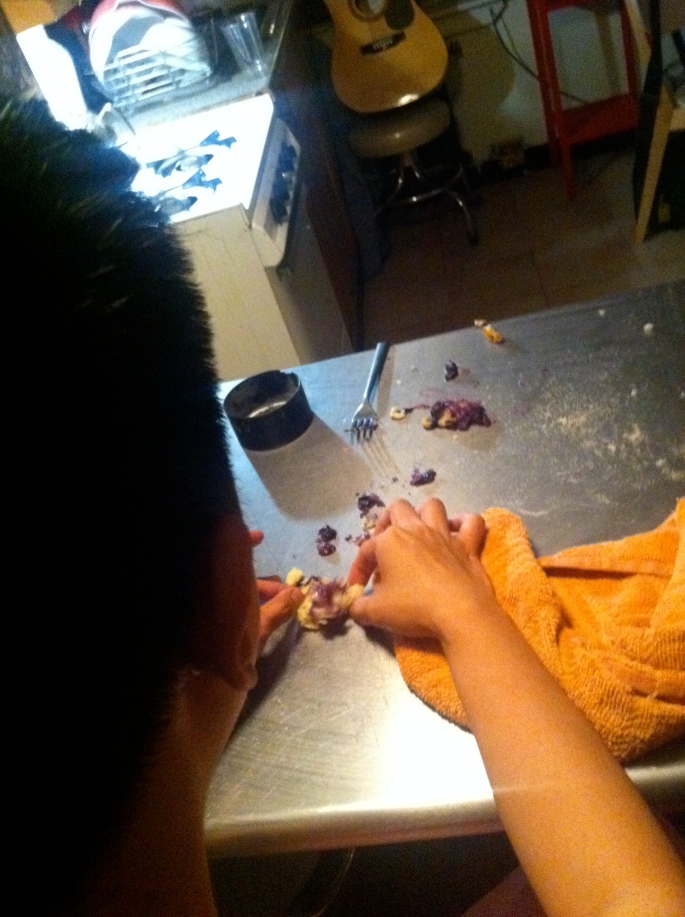 Me:  Like when your boyfriend says, hey, please don’t kiss me while we’re hanging out with my grandma – she knows I’m gay but I don’t want to freak her out.  That’s your boyfriend acknowledging that his sexuality is a nuisance for straight people.  That’s him asking you to be an accomplice in apologizing for or covering up your sexuality.

Him:  So you’re saying we should stop doing that.  We should announce it.

Me:  AIDS.  Oh!  The muffins are done.  Looks like they’re falling apart.  I guess I shouldn’t have haphazardly put twice as many blueberries in there.

Him:  Yeah.  They’re soggy inside and they didn’t hold form.  I like them.  Good job, Jerk.

One thought on “FriDATE”